/ News & Research / Are you Dehydrated? 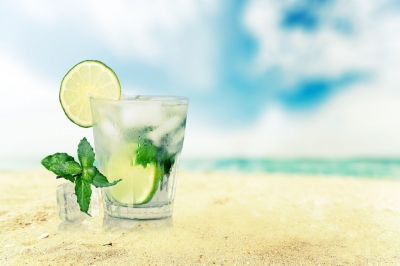 
Water is a vital component of life, second only to oxygen.

The human body is made up mainly of water. Calculations show that it should contain 65% of water at a minimum. This goes up to 85% in the case of certain organs like the brain.

While everybody knows that man needs water to live, the exact reasons why it is so vital to health are rarely explained. This absence of information results in water being neglected as an important health factor.

Most people believe that dehydration is what happens when one runs out of water while walking through the desert. They also think that they take in enough liquids during the day. Indeed they drink coffee, tea, soft drinks or other beverages. However, most of these increase the water losses because they are diuretic and cause perspiration. Alcohol and tobacco consumption further increase losses.

During summertime and in hot countries where one is either exposed to high temperatures or lives in air-conditioned spaces, dehydration can occur very quickly and without one being aware of it.

According to studies, two out of three people are partially dehydrated. Even light dehydration of no more than 2% of total body weight disturbs physiological functions and decreases the organism's efficiency. Metabolism and energy levels are directly affected, and this extends even further to mood and mental alertness.

Fatigue and lack of energy

Dehydration is the most common reason for chronic fatigue. It is the primary reason why metabolism fails. Tissue dehydration causes a reduction in enzyme activity (enzymes increase the speed at which chemical reactions within the organism take place) and can slow down the energy production processes by a factor of up to 40% within one hour from the time it sets in.

On the psychological side, dehydration manifests itself by a severe lack of interest in daily activities.

Water distribution within the organism is prioritized. Where dehydration is chronic, the intestine absorbs as many liquids as possible, resulting in concentrated, hard faeces. This makes excretion of faecal matter difficult and what is a natural process can turn into a serious annoyance.

Dehydration is a key factor in obesity. Excess weight comes from eating more than the body can use or burn. But where does the tendency to eat more than necessary comes from? There are many answers to this question. A lesser known one is thirst.

There are two ways to satisfy thirst:

The second option provides the organism with the liquids it needs but unfortunately it also contains unnecessary calories that contribute to weight gain. More often than we realize, we try to quench thirst by eating instead of drinking water.

Cholesterol is one of the most vital compounds used by the organism. However, its presence in the blood in high quantities can be an indicator (not the cause) of inflammation and increased cardiovascular risk in some cases.

A third of the cholesterol comes from food while the remaining two-thirds are produced by the organism itself. Hypercholesterolemia (the medical term for high cholesterol levels) can be traced to either external causes (food) or internal ones (overproduction).

One of the functions of cholesterol lies in the building of cell membranes. Dehydration is responsible for the draining of liquids from inside the cells. The organism responds by increasing cholesterol production to stop the loss. When this happens, increased cholesterol levels show that the cells are functioning under nonoptimum conditions, and it is thus possible to lower the amount of cholesterol in the blood through the intake of liquids with no other change in the diet whatsoever.

Dehydration can increase the repercussions of cancer through a variety of mechanisms:

- Dehydration increases oxidation (how fast damage to cells accumulates) and acidosis (increased acidity in the organism),

- lowers the amount of available oxygen,

- decreases the ability of the body to detoxify itself from chemical toxins and radiation,

- has an adverse effect on the function of the intestine and its flora,

- can cause damage to the DNA.

A mere five glasses of water a day decrease the incidence of colon cancer and bladder cancer by 45% and 50% respectively.

The aging process involves the gradual reduction of intracellular and extracellular liquids, i.e. liquids found inside and outside cells. A newborn baby's body consists of 85% water. This percentage gradually decreases to about 70% in an adult and continues to decline as we get older.

This loss of water contributes to the reduction in tissue volume and is characteristic of the ageing process. Dehydration intensifies and accelerates it. Chronic dehydration makes one grow old faster.

Other symptoms that may be caused by chronic dehydration:

Why are we dehydrated?

Chronic Dehydration affects anyone who either doesn't take in enough liquids or can't retain them.

Most of the water in the body is found inside the cells. But if the body is to keep the intracellular water certain conditions must be met.

Drinking water while the above requirements aren't met may worsen the dehydrated condition instead of improving it. Diuresis (the increase of urine production) causes the loss of vital minerals and micronutrients and makes water retention more difficult.

The intake of natural unrefined sea salt, containing over 80 minerals and other nutrients, helps substantially. Vegetable juices are an excellent source of high-value nutrients which can be absorbed immediately.

The intake of clean, good quality water in sufficient quantities, along with enough micronutrients to cover the organism's needs, are the cornerstone of good health.

Autoimmune diseases & Metabolomic Analysis Result presentation of 40.000 cases at the Tokyo international congress of Rural Medicine.
Do you have questions about Metabolomics? Contact Us
© 2021 Metabolomic Medicine. All Rights Reserved.  Cookies Policy  Privacy Notice
Design & Developed by